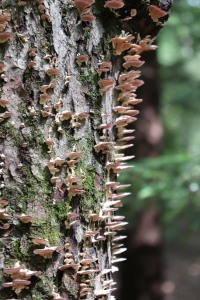 Some kind of small shelf fungus. Has nothing to do with my essay. I just liked it.

You’ve heard about driveway moments—you’re in the car, listening to a really good radio program but have arrived home, so you sit in the driveway to listen to the rest before going inside.

My driveway moments happen without a car. Each morning, I like to step out onto my driveway and greet the day. One morning a buck and turkey looked at me from the edge of the woods. The other day, I sat in a chair and watched birds: warblers, sparrows, bluebirds, woodpeckers. I’ve never had it so easy. Another morning, a porcupine noshed on my “lawn.”

It’s not really a lawn, just weeds and remnants of grass left over from the previous owner. Some day it’ll be a meadow. The “lawn” mostly died in the dry weeks we had earlier in the summer. I don’t do lawn watering. As far as I’m concerned, if you are nature, you are on your own. That’s why a meadow will be appealing. Tailored to fit the local environment, it won’t need coddling.

I’ve been reading about ecological gardening. It’s kind of revolutionary. Rather than amend the soil to grow the plants most people expect to see in gardens, which largely aren’t native, you grow plants already adapted to your soil. In my case, it’ll mean plants that thrive in sandy, acidic soil. I’m surrounded by a pine and hemlock forest.

The point of the meadow is to attract pollinators. Insects and birds. Worldwide, insect populations are plummeting. While that could be good news for some—fewer mosquitoes!—if you eat food, it is very bad news.

Another benefit of an ecologically grown meadow is, allegedly, low maintenance. You don’t till, or even weed by pulling. It’ll take a few years to get established, but not tilling means you don’t disturb the “seed bank.” There are millions of seeds in the soil just waiting for the right moment to germinate. So rather than disturb that ground and churn up the long-dormant seeds, you smother the lawn, with something like cardboard so you don’t kill the soil microbes, layer on mulch or compost (nothing too nutrient rich since the underlying sandy soil isn’t and I don’t want plants that need those nutrients), and then it’s a race to plant what you want along with some ground covers that will eventually be taken over but in the meantime will outcompete weeds. That’s the theory. I’ll let you know how it goes.

Right now, the nonnative weeds feel overwhelming: buckthorn, multiflora rose, vinca minor, pachysandra, garlic mustard, every day brings a depressing new discovery. Even some natives are very aggressive and will take over if not controlled. Before I knew all this, it just seemed like a nice, weedy yard. But when nonnatives take space away from local plants that feed insects and animals, you have a problem.

And if you think this is a metaphor for how I feel about immigrants taking jobs from Americans, fuggedaboutit. Or maybe it is. Nonnatives that provide a benefit, do work others can’t or won’t, then sure, I’m all for it. Lots of plants are useful that weren’t here before European settlement. NPR ran a piece about the U.S. government’s experiment in the 1960s to hire high school students for a summer to do farm work so we didn’t need Mexican migrants. Spoiler alert, it didn’t work out so well.

Not because the kids couldn’t do the work, though some couldn’t, but because the living conditions were so horrific. And not much has changed there. Human beings die every day picking the food I paw through and choose or reject in a grocery store with nary a thought. Sometimes I think to myself: Is this worth someone’s life? Someone dies for everything we eat, wear, drive, listen to, sleep on, walk in. You name it. If a tag came with your skinny jeans telling you how many people died to make them, would it change how you buy? Not a bad thing to consider this Labor Day.

But I digress. There are plenty of places you can learn about the dark side of life as an American.

With September, I expect to see sudden changes. The days, hopefully, will get cooler and the nights much cooler. What I’ve liked about being out here, so far from that heat island that is Boston, is that when it does cool down at night, it really cools down. Where Boston might be lucky to drop into the 70s during a heat wave, here it’ll be in the 60s. And I can keep my windows wide open at night.

I love the quiet. Last night, I was reading and heard a noise, like maybe an animal outside. Turned out to be my cat snoring. It dawned on me that I haven’t yet heard a siren. I don’t hear my neighbors’ air conditioners or smell their fire pits or hear their phone conversations. I hear the gurgling stream (more of a gush after a foot of rain in August), crickets, frogs earlier in the summer, the occasional barred owl (“Who cooks for you?”). Tweets come from birds.

I love everything about September. Especially since it no longer means returning to school. Crickets will grow quieter. In the city, they were an August thing. Here, they’ve been chirping nonstop since I arrived in early July. In the wetlands, maples are already turning red.

I’m one step closer to getting that generator and an open porch enclosed. Onward toward fall.

Enjoy today, wherever you are.

Exploring the World of Fiction

all of the romance, none of the bullshit

where sapphic and queer, women loving women stories are reviewed