Zen and the Art of Handling Setbacks 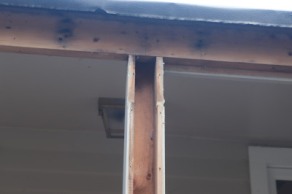 Writing a novel is a lot like building a porch. I’m not talking about planning and prep work and how conceiving and completing any project has similar steps and cautions. This is no Zen and the Art of Novel Writing (or Porch Building). This is about setbacks.

It began so simply. A three-walled, roofed but open porch filled the nook between my house and garage. If it had a fourth wall, it would make a nice mudroom and I could go from the house to the garage without going outside. I could open the kitchen door and not worry about the cats escaping.

There’s more work for builders than there are builders available. I’ve noted that before. (Go into a trade, young person!) So requesting quotes started right when I moved here in July. I just want it enclosed by winter, I said, hoping that would get me onto a crowded schedule.

It took till August to get the quotes collected and decided on. September was consumed with revising the specs and pricing. Ordering the materials would take several weeks (don’t ask why). October filled with other projects. It rained. Then rained some more. My builder fell behind on other jobs.

When it came time to start the porch, my builder noted that the deck’s posts were rotted. Another support post proved to be hollow. The ceiling, as suspected, had some rot, but the entire roof had been poorly built—two-by-fours for rafters and a header that was too small. So the whole thing had to come down and be rebuilt.

Imagine getting halfway through the first draft of your novel and finding out you have the wrong point of view, or there isn’t enough conflict, or the characters are flat. You might need to start over. That’s pretty much where I am in my current novel in progress. I’ve been stalled for weeks and assumed it was because other projects distracted me. Now I think my support posts might be rotted.

The porch could be whipped into place, my builder said. Couple of days, he said.

Then the carpenters (specifically, framers) showed up late and left early. They ran out of joist hangers. They didn’t know what the plan was and needed an update from the builder (who apparently doesn’t actually build anything himself).

I reminded my builder I wanted it done before winter. He admitted we were running out of weather.

I don’t have such a firm deadline for my novel, which is part of the problem. I’m good with deadlines. I could pretend, use November as a goal—National Novel Writing Month is intended to do just that. But I know it’s a fake deadline.

To make myself feel better, and to give me some deadline discipline, I noted in my last post that I was going to take a MOOC (massive open online course). I started it: Stories of Place: Writing and the Natural World. I got as far as the first section’s assignment, even have an idea for it, and, well…

I didn’t feel well one day and I guess I didn’t eat or drink enough because I fainted and cracked my chin open and whacked my jaw. Five stitches and a week later, I can barely eat solid food (butternut squash soup is delicious).

Do I feel like writing an assignment about place? Do I feel like reworking my novel? What do you think? It’s another fake deadline. The course runs through December and stays online long after that, so there’s no real incentive to keep up.

Meanwhile, at the porch, the framers rebuilt the deck and framed in the roof. The roofer came the day before Thanksgiving. He thought he could get it done but then the snow on the roof beside the porch started melting, dripping onto the porch. You can’t install a rubber roof with water. He said he’d try the next afternoon. Not only was that Thanksgiving, which he said he didn’t mind, but it was also going to be bitterly cold. I arrived home to find no new roof.

With several days of rain expected, now I wait to see when work on the porch can continue.

I also need to find a doctor to remove the stitches by Thursday, the 10 days the ER doc said they should come out by. I don’t have a new primary care provider yet because my insurance doesn’t cover very many providers or any of the good hospitals out here in western Mass. So I’ll probably drive back to the Boston area for the stitches.

That will cost me a day.

Then, maybe, I can tackle the novel. Hire some framers to whip it into shape? Yeah, they don’t exist.

There are many reasons why I have never done NaNoWriMo and these are several of them. My MOOC assignment, however, I should be able to tackle. I’ll post that next week. (See what I did there? I just gave myself a deadline. Wish me luck.)

← What Next? I Mean for the Planet, not Politics
Power Lines →

Love is the universal story. Women loving women are the heroes of our own lives. Author Karin Kallmaker's site and shop.